The most common manner in which the catcher signals the pitcher is by using his fingers of the hand from which he throws. The signals are to be given in a position called as the squatting position with the hands of the catcher positioned in a way that they are between the legs and are close or backed up against the cup.

Make sure that the hand isn’t too low or else the signals will be easily visible.

The catcher has to show the signals with proper movements of his fingers so that the pitcher can see them properly. Make sure that the signal is not given very quickly or else the pitcher will be confused.

The legs of the catcher should be wide enough so that the pitcher and infielders can properly see what kind of pitch is called. Make sure that the legs are not opened too far or else the opposite team’s coaches can easily see the signals and the pitch will be relayed to the hitter. 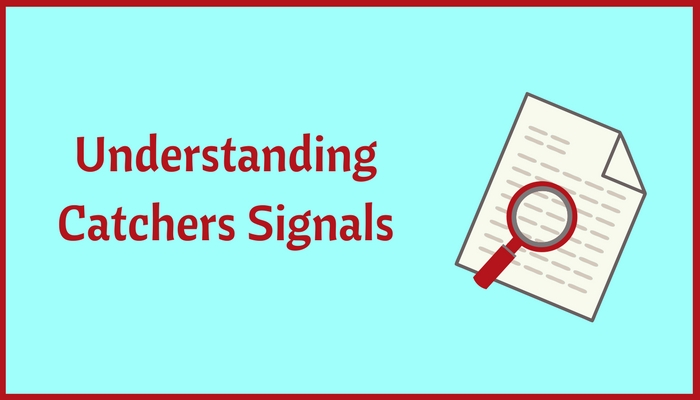 The glove hand is supposed to be positioned in such a way that it is outside and below the knee of the left leg, for the catchers that are right handed. This will make sure that the signals are blocked.

Make a note of the following things when you signal:

For a basic pitch, here are a few of the common signals. The catcher uses his fingers to signal the following:

For a particular pitch, the number of fingers used to signal can vary. They may even be different for different pitchers. The types of signals depending on the type of pitches the pitcher throws.

Just keep in mind that both the catcher and the pitcher are aware of the signs and have a mutual understanding. The signs should be made in such a manner that they are easy to remember.

If in case the pitcher is not able to see the signals clearly or properly, a thin strip of white tape can be used in between the middle knuckles of the catcher’s throwing hand.

The catcher can also paint their nails with white color and show signals to the pitcher. On the other hand, various other signals such as body signals or glove signals can also be given.

Type of pitch and location of pitch

The type and location of the pitch is yet the common information that passes between the pitcher and the catcher. The catcher, in the basic form of the signal, shows a sign for the type of pitch and later taps on one of the thighs for the location sign.

Keep in mind that the signals are easily understood by both the catcher and the pitcher, but should not be understood by the hitter or else your signs will be stolen.

If the runner is found stealing the signals, the catcher can call a timeout and talk about the signals with the pitcher. Both can then change their signs and discuss mutually.

Most of the signs and signals are given by the infielders and coaches so that the catcher can easily relay them to pitcher.